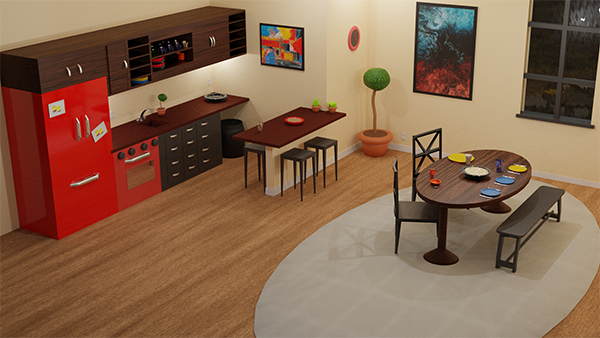 A 3D dining room scene was made for my 3D modeling and design fundamental class. It uses Blender, a 3D modeling software. The scene was set to show an open setting for a dining room that can be used for video games that need a kitchen setting or a 3D rendered concept of different objects. The idea and set up of the room is original and created by Jade Andersen.

My process to start the dining room was to make a list of all the objects I wanted to show in my scene. From that point I looked at different dining room set ups on google to get inspiration and sketch out the start of my project. Moving my rough sketch to the blender I started with the basic shapes to get a feel and layout of the room. After that I played around with different shapes, molding and playing with different materials until I came to my final product which was rendered in Cycles to produce the most realistic render.

A 3D microphone was made for my modeling and design fundamental class. It uses Blender, a 3D modeling software. The first picture you see is the wireframe and the picture below it is the model without the wireframe applied to it. The scene was set to show a wireframe model of a complex object. The idea and set up of the object is original and created by Jade Andersen.

I wanted to find an object that was complex enough where I could still learn new skills while creating it. When looking around my computer, most objects around me were too easy in my opinion and then I saw my Microphone. Which has equal complexity to simplicity.